Blog - Latest News
You are here: Home / News / Submarine Communications Cable – The Cloud Down Below

To give international businesses voice and data connectivity, broadcast services and communication access in this digital economy, we acknowledge the importance of satellites above us and The Cloud. But surprisingly, 99 percent of data transmitted around the world actually relies on a network of submarine communications cable to get around. Lying deep on the world’s oceans, this network of fibre-optic and coaxial cables connects all continents except Antartica. Out of sight to most people, a network of almost a million kilometres of undersea cabling network carries the world’s internet, long enough to travel to the moon and back – twice.

Laying submarine communications cable is a slow, construction-intensive and expensive procedure. But it is still faster and cheaper to set up than satellites, which are more sensitive to strong weather phenomena causing disruption to data transmissions. Despite currents and cable chewing sharks being underwater cables biggest enemies, reliable dta transmission is guaranteed for cost-effective ethernet services, bandwidth tiers from 1Mbps to 1000 Mbps (GigE) and point-to-point/multi-point, full-duplex native low latency and burst tolerant ethernet.

The main problems with the 1071 operational satellites orbiting the earth are latency and bit loss. Transmission to and from space takes time, while optical fibre now works at 99.7 percent of the speed of light. Imagine Antarctica’s problem, the only continent without a physical connection to the net. The Antarctic research stations rely on satellite bandwidth only while producing more climate research data than they can send through space.

The explosive growth of internet traffic has risen from 5Gb of data consumption per capita in 2013 to 14Gb in 2018, posing a serious capacity problem. However, new phase modulation techniques and improvements in submarine line terminal equipment (SLTE) have boosted capacity by up to 8000 percent, making submarine communications cable ready for the increased traffic.

There are currently 354 ‘lit’ (working) cables on the ocean floors spanning almost one million kilometres. There are also 22 ‘dark’ cables, waiting to be lit. To satisfy our digital hunger, another ten international megaprojects are set to add a total of 90k kilometres. As the data transmission boom is not likely to slow down, many more construction intensive cable projects are on the cards.

Below are two of the new megaprojects that will connect Australia to the world in 2018.

Special cable ships run anvilled cables across flat surfaces of the ocean floor, avoiding coral reefs, sunken ships, fish beds, and other ecological habitats and general obstructions. The cables can be hundreds of thousands of miles long at a time and as deep as the Everest is tall.

Cables located at shallow depths are the size of a softdrink can and are buried beneath the ocean floor using high pressure water jets. At a depth of 2400m there is not much is going on. This is why the deep water cables, roughly the size of a Sharpie pen, need less galvanized shielding wire.

The installation costs depend on total length and destination but running a cable across the ocean invariably costs hundreds of thousands of dollars.  Yet the install and operating costs are still lower than the production and running fee of a satellite. Launching a satellite costs at least $4650 per kg, which adds up when you know that the International Space Station weighs 420,000 kg. 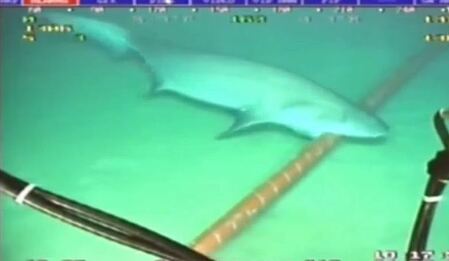 The benthic zone is the depth where marine life and cables meet. A 2006 study showed that submarine communications cable have no impact in this environment. There is no difference in organism diversity or abundance, although cables prove to be a good attachment point for anemones that cannot grow in soft sediment areas. From 1877 to 1955, there were 16 reports of cables faults caused by the entanglement of various whales. No whales have been hurt since the introduction of improved techniques for placement of modern, less self-coiling coaxial and fibre-optic cables when lying on the seabed.

Submarine communications cable can be broken by boat anchors, trawling by fishing vessels and turbity currents (underwater muddy avalanches) caused by cyclones, earthquakes. And shark bites. Unlike regular overland fibre or copper cables, submarine communications cables must carry high voltage power to the cable repeaters, creating electromagnetic fields. Sharks mistake the electromagnetic currents for distressed fish so they attempt to feed on the cable. To protect their infrastructure, companies like Google wrap their trans-Pacific fibre cables in shark-proof Kevlar material.

What To Look For In A High Quality Wiring Harness