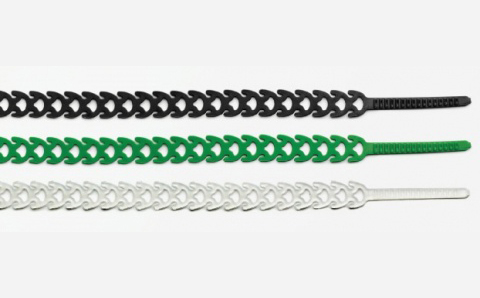 ‘It’s A Simple, Cost- And Waste Effective Idea, But The Point Is No One Else Had Come Up With It.’

Hailed as the next generation cable tie, the Rapstrap is a reusable polyurethane band that ties up cables, bin bags, plants and has an endless array of other commercial and domestic uses.

Andrew Harsley was 15 when he put out the rubbish and the idea of the Rapstrap came up. He spent 20 years perfecting the Rapstrap, took the reinvented tiny plastic strap to the 2008 UK invention marketing game show Dragon’s Den and won to close a $61 million deal, making Harsley’s invention the show’s biggest success story.

Discontented over the original 1958 Tie-Wrap design by Maurus C Logan of US electrical company Thomas & Betts, Harsley reinvented the Rapstrap to do the same job, but four times more cost- and wastage effective. UK consumers use as many nylon cable ties as carrier bags with a substantial amount of plastic going to landfill each year. Australia uses almost 7 billion plastic bags each year, 170 per person per year, with 3% being recycled.*

* The use of single plastic bags in the UK dropped over 85% since the introduction of a 5p charge in October 2015. 7 Billion plastic bags were handed out in the first 6 months of 2015, to 500 million in the same time in 2016. Source the Guardian and Australian Ethical

Rapstrap Is The Efficient Alternative

Cutting the end off, you can use it again and again. Made from elasticated polyurethane, a single 300mm Rapstrap typically replaces up to 5 standard ties, greatly reducing waste and lowering costs. Rapstrap is soft, flexible and extremely versatile. It is flexible enough to be used on delicate installations.

Use Rapstrap Over And Over Again

1. Reusable: the Rapstrap gets used up from the back, whilst the tongue-front end is kept and used again and again. As a result, a single Rapstrap can perform several ties, and just gets a little shorter with each use. This dramatically reduces waste and saves money.

2. Rapstrap comes in convenient tear-off sheets. To use, simply tear down a row of Rapstraps from the tongue end and start tying. The Rapstrap’s cellular tie strip can loop and weave into a multitude of different configurations.

3. Rapstrap derives its superior performance from a combination of the special shape of the cells, and the strong and flexible qualities of the polyurethane from which the Rapstraps are made. This patented design is a clever piece of engineering which allows the cells to deform during use, and this in turn allows one portion of the tie strip to pass through another.

4. The cells do this by folding along their spine, which makes them narrower and able to pass through one another. As each cell in turn gets pulled through, it automatically changes shape and glides through to form a loop in the Rapstrap. However, when pulled backwards, this folding process occurs in the opposite direction, and this makes the cell’s horns stick out. In this configuration they snare the outer cell and so lock the tie in place. This prevents the tie from coming undone.